Our firm consists of a total of sixteen professional and technical personnel, which provides sufficient staff to perform projects that may arise within schedule. Johnson-Frank & Associates, Inc. maintains a highly professional staff. We are proud of the fact that 4 of our 10 office staff and two of our Survey Party Chiefs are registered to practice land surveying in the State of California. Below is a summary of the experience, training, and skills of our professional staff. 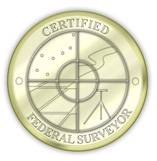 Mr. Frank has a Bachelor of Science Degree in Surveying Engineering obtained from the California State University in Fresno and a Masters Degree in Business Administration obtained from the California State University in Fullerton. He has been licensed as a Professional Land Surveyor in the State of California since 1995, the State of Arizona since 2004, the State of Nevada since 2008, and became a Certified Federal Surveyor in 2007. He has over 28 years experience in the surveying industry.

This project involved conducting boundary and topographic surveys, encroachment analysis, and writing new legal descriptions, as well as the preparation and recordation of a Parcel Map to facilitate development of portions of said property. Mr. Frank served as the Project Manager for this project, which was completed in 2008 at a cost of approximately $160,000.

Roger Frank, President and CEO, co-founded the present day corporation of Johnson-Frank & Assoc., Inc., in 1975. His grasp of the future direction of the profession, as well as the impact of rapidly changing technology on the role of the surveyor, was the primary reason for the company to be the first firm of its' size in southern California to embrace Global Positioning Satellite systems in 1988.

Mr. Frank's early training was with the Orange County Surveyor's Office in both the field and the office. He developed a keen interest and in-depth experience in geodetic horizontal and vertical surveys while with the Orange County Surveyor's Field & Office Computation section. He also served in the Subdivision Map Checking section for his last six years with the County, the last three of those Mr. Frank served as supervisor of that section. He developed vast boundary and subdivision experience while in this position. He also supervises and trains Johnson-Frank's Subdivision Map Checking section, which currently serves 7 local cities.

Roger Frank's leadership at the helm of the organization has guided it through the highs and lows of economic climates. Always innovative, yet strongly committed to product integrity, he oversees the key strategy and execution of assignments for Johnson-Frank & Assoc., Inc., including survey projects in 35 states.

The CRA program involved extensive cadastral retracement throughout California's deserts from Parker, AZ to Corona, CA, and from Blythe, CA to Hoover Dam. Mr. Frank served as the project manager for the Desert CRA tasks under this contract. This project was completed in 2007.

This project involved establishing the original boundary lines of the March Air Reserve Base and assisting staff with documenting and preparing legal descriptions in support of the BRAC process which included disposing of excess land. Mr. Frank served as the project manager on this project. This project was completed in 2007.

Mr. Padilla began his surveying career in 1981 and brings extensive experience and knowledge to the Johnson-Frank Team. He was employed until 1983 when he went back to Fullerton College as a full time student. After completing and receiving his certificate in computer programming Mr. Padilla returned to JM Negrete & Associates in April of 1984. Mr. Padilla worked in both the field and office with a heavy emphasis on boundary, and topographic surveys as well as Final Maps, Parcel Maps and Condominium Diagrammatic Plans.

In April of 1990 Mr. Padilla joined the offices of Pafford and Associates in Los Angeles, CA. Major projects during his employment at Pafford include the conversion of substructure utility plans at Disney Studios in Burbank, CA to CAD format, the CAD plans for substructures at Sony Studios in Culver City, CA, the precise building layout calculations for the Southern California Gas Company high-rise building in downtown L.A.

In 1993 Mr. Padilla was employed by Coast Surveying in Tustin, CA. His first assignment was as a consultant to the Orange County Surveyor’s Office reviewing the calculations for required tolerance of maps for the County’s new Geographical Information System. The original 9 month contract was extended another 6 months. After the completion of the contract Mr. Padilla was assigned to support the survey crews with layout and grading calculations for the construction of the 241 Toll Road and drafting the railroad crossing in Orange County for the Metro Rail Project.

In October of 1998 Mr. Padilla joined the offices of Guida Surveying, Inc., in less than 2 years Guida Surveying doubled in size due to the securing of a contract to survey Telecommunication Cellular Sites by Mr. Padilla. By 2005 Guida Surveying grew to 4 offices in California and Mr. Padilla was promoted to Director of Operations for the Corporate Office in Irvine, CA. Mr. Padilla’s responsibilities included the day to day operations of the company, meeting with clients and prospective new clients, writing proposals for projects and reviewing work of subordinates working under his direction.

In April of 2018 Mr. Padilla joined Johnson-Frank & Assoc., Inc. as a Project Surveyor and Survey Project Manager. He currently manages various survey projects throughout the Southwest.