In 2005, Johnson-Frank was awarded a contract for on-call survey/mapping services by the City of Anaheim. The contract gave the City Surveyor immediate access to our pool of resources. This allowed for greater flexibility and accommodation of resources for projects. Johnson-Frank and Associates acted as an extension of the City Surveyor’s Office and was always able to respond to staff needs in a timely and professional manner. The following are a few examples of services provided to the City. 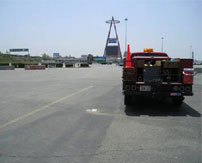 Subdivision and Parcel Consolidation of Anaheim Stadium Properties: As part of our contract we worked closely with city staff at all levels of management to subdivide and consolidate the properties comprising the Anaheim Stadium complex. This major project involved numerous agencies and municipalities. It required the review of more than 25,000 pages of various legal records to determine their affect, if any, on the project and client goals. Through due diligence, several potential liabilities were able to be addressed before they could cause harm to title of the property. After resolving all title issues, conducting boundary and topographic surveys, encroachment analysis, and writing new legal descriptions, a parcel map was filed and recorded. This project was completed in 2008 at a cost of just over $160,000.

City-Wide Sanitary Sewer Improvement Program: This project comprised several miles of new pipelines together with short segments to repair the aging infrastructure. Our ability to deploy substantial resources quickly meant that several construction sites were served simultaneously. Services provided included design topographic surveying, construction surveying, and monument preservation. With several thousands of feet of new sanitary sewer lines being laid simultaneously, quality assurance and quality control procedures were an integral part of daily activities. This project which was completed in August 2009 at a total cost of $45,000. 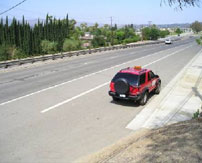 Santa Ana Canyon Road Rehabilitation and Realignment: Santa Ana Canyon Road serves as a major transportation artery for North Orange County. With more than 20,000 commuters each day relying on this corridor for access to regional services, surveying activities were carefully managed to provide the greatest free flow of traffic while expediting the delivery of meaningful data to city design staff. The project took us through nearly 100 years of legal records and engineering notes in order to re-establish the historic dual alignments. Dozens of monuments and ties were found, reset, and re-established in an effort to perpetuate survey evidence and comply with state laws. Our noninvasive approach was appreciated by commuters and City staff alike. This project which was completed in February 2010, with a total cost of $36,000.

With each call for service, Johnson-Frank implemented QA/QC measures to supply accurate and precise data in various digital and print formats as needed by City staff.

Over the past 36, years Johnson-Frank & Associates, Inc. has provided the City of Irvine with countless services including checking of Subdivision Maps, both digital and hard copy, checking of lot line adjustments, checking of legal descriptions and exhibits, indexing of centerline ties, boundary surveys, centerline alignment surveys, construction surveys, control surveys, and deformation/subsidence surveys. 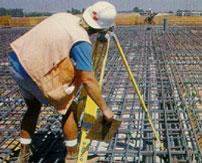 In 1980, Johnson-Frank & Associates, Inc. designed and implemented a city wide geodetic control network for the City. This network included 227 stations and was completed prior to the advent of GPS equipment. The survey was performed with Wild T-2 Theodolites and Electronic Distance Measuring equipment. We have subsequently tied this network to the California High Precision Geodetic Network (HPGN) and has been readjusted to the North American Datum of 1983 (NAD83) (1991.35 Epoch).

Our firm has served as an on-call survey contractor for the County Surveyor’s Office off and on since Johnson-Frank’s founding in 1975. Expected services included all types of surveying including construction staking, monumentation, boundary surveys, geodetic control, scour study surveys, map checking and any other services that might be deemed necessary by the County Surveyor.

In 1998, our firm provided creek sediment measurement surveys along Serrano Creek in central Orange County. The project involved cross-sectioning the creek bed at regular intervals to determine the volume of the creek for use in flood control planning. 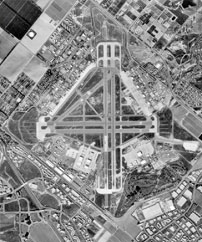 In 1997, our firm provided ground control for the re-mapping of the El Toro Marine Corps Air Station in Irvine, California. The County of Orange mapped the base at a contour interval of 1.0 foot with 0.5 foot accuracy. Approximately 200 pre-marked ground control stations were required for this project. The project was accomplished using fast static GPS methods tied to several of the Orange County Surveyor’s horizontal and vertical control stations. All of these stations were positioned within 0.05 feet (1.5cm) three dimensionally.

In 1996, our firm was selected to monument 46 boundary stations along Trabuco Creek in Southern Orange County. The contract called for the stations to be monumented within 0.02 feet (0.6cm) of the locations shown on the Record of Survey. In order to meet these specifications, we developed a unique system of measurement using Real Time Kinematic (RTK) GPS, static GPS, and conventional surveying instrumentation. The system was developed using a least squares pre-analysis of the measurement technique.

Our firm has also been contracted by the County to check Record of Survey maps prepared by in-house County personnel as well as to check excess subdivision maps to assist the County with its’ backlog. Our firm was to check the maps for correct boundary determination and compliance with all applicable state and local laws.

Johnson-Frank has held numerous on-call contracts with the Port of Long Beach over the years, dating back as early as 1990 at which time we were contracted to establish a Port wide geodetic control network. From 1990 to 2009 we have completed numerous projects with the Port ranging from topographic surveys of rail lines to the construction staking of Pier T. 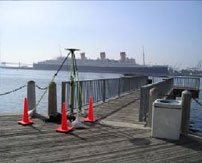 Port Wide Geodetic Network: Under our 2006/2007 on call contract we were tasked with once again re-observing and re-establishing the Port wide geodetic control network. This project was completed in March 2007. The project involved the re-observation and re-establishment of the Port’s Geodetic GPS Control Network. It included 48 monuments in and around the Port. The project generally followed the NOS NGS-58 2cm guidelines. Deliverables included digital photos, descriptions, a complete control map, and data sheets for each station. In addition, values were published in NAD83 (2007), NAD83 (1991.35), NAD27, NGVD29 MLLW, and NAVD88. 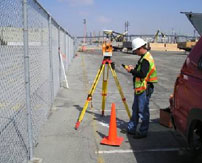 Topographic Survey of Weyerhaeuser Terminal: This project was completed in May 2008. It included topographic surveying of the approximately 19 acre active Weyerhaeuser Terminal. This project was extremely difficult given the active nature of the survey and the need to work closely with Terminal staff to coordinate activities. In all, the project included 2,411 topo shots from 19 individual total station occupations throughout the terminal, as well as GPS observations from the topo control to the recently re-established Port Wide Geodetic Control Network.

This contract was awarded in January 2004. There were ten firms given contracts under this program. Over the life of the program there were 235 individual tasks that were contracted to the participating firms. Johnson-Frank was contracted and completed 22 individual tasks totaling $917,261. In addition to this, Johnson-Frank worked as the small business sub-consultant for two of the other participating firms. Said sub-consulting work amounted to $252,368 over the life of the program. Further details of two sample projects under this contract are shown below. 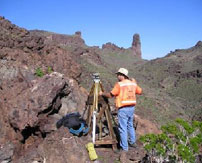 Colorado River Aqueduct (CRA) Real Property Recordation, California (Desert Surveys): The main focus of this contract / program was to locate, map, monument, and record Records of Surveys for the properties that comprise MWD’s Colorado River Aqueduct. This project covers the aqueduct right of way, access roads, camp sites, aggregate sites, transmission lines and other properties obtained, mostly from the federal government in the early 1930s. The project runs from Parker Dam on the Colorado River about 300 miles southwesterly across mostly high desert and mountains to Lake Mathews, near Corona, CA. Most of the surveys were in desert areas where no surveyor has been since the original GLO surveyors of the 1850s-1880s setting the original stone/dirt/stick sectional corners or the MWD surveyors of the 1930s locating and staking the physical aqueduct. The surveys of this program were the first “boundary” surveys since the initial sectionalization. As one of the survey consultants, Johnson-Frank & Associates Inc. performed the following in three counties and two states: retraced 15 Sections, retraced 3 miles of Rancho line, retraced 2 miles of State line, retraced/monumented 4.5 miles of Indian Reservation line, retraced/monumented 6 miles of Township lines, retraced/monumented 3 miles of Standard Parallel, retraced/monumented 10 miles of National Park Boundary, located 30 miles of CRA Centerline, located and monumented 17.5 miles of CRA R/W, located and monumented 15 miles of MWD Transmission Line, located and monumented 23 miles of MWD Road R/W, set 440 monuments, and recorded 42 sheets of Records of Surveys in 3 counties and 2 states. 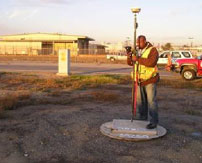 Structure Positioning Program, Southern California: This project involved the recovery and horizontal and vertical positioning of 4,912 structures throughout Southern California. This project was on a very short turn around schedule of 3 months from notice to proceed. To meet this deadline, we employed as many as 4 crews at a time, all using real time network GPS positioning. The project was completed on time and within budget. Of particular note on this project, was the requirement that all deliverables be provided on the 1991.35 NAD83 Epoch. This is of note as the project covered the whole of urbanized Southern California, throughout which much tectonic motion of varying amounts has occurred since 1991. Near the coast, as much as 2.3 feet of motion has occurred, while further inland, the amount of displacement is closer to 1.7 feet. This made fitting the project to the old epoch, upon which MWD’s records are based, an interesting challenge.